“After 15 years of being a stay-at-home mom, I feel I have a bigger purpose and place in our community and my career and I want to keep that!”

Mandi Wilke is goal-oriented, always makes time for fun, and brings along those who are drawn to her go-getter spirit. She’s also extremely driven and has found success in a whole new life stage compared to where she was just five years ago.

When Mandi was unexpectedly fired from her job, not to mention in complete shock and resumé-less (never having needed one before), she knew what she needed to do next: file for unemployment. At the time, she was also going through a divorce, and her main concern was supporting her three kids.

After filling out the necessary online application, some job opportunities popped up on the screen – potential matches based on the interests she had listed. One of them was The N2 Company, the company behind Stroll.

“I didn’t know what N2 was – I had zero understanding. I just clicked and applied because I had to,” Mandi said.

Later that night, a good friend shot her a text saying he had an opportunity she might be perfect for. He sent a screenshot of an N2 listing for a Stroll Area Director. This coincidence jump-started a deep dive into this mystery company

Mandi went to training for her Stroll publication in May of 2018. Ramp-up was filled with difficulties, and making sales was only part of it. In June, her divorce was finalized. In August, she bought a home and resettled there with her kids. By September, she remembers calling Wendy Franke, her Launch Director, and telling her she’d never make it through. Thankfully, Wendy told Mandi in so many words, “Quit being desperate and do what you do.”

Not bad advice. After all, what did she have to lose?

And with her 198th meeting, Mandi made enough sales to go to print in October 2018.

Because the previous summer was so difficult for both her and the kids, Mandi was determined to make the summer of 2019 different and intentional. She decided on a couple of business goals and hit them both by August. In her view, it was a good example for her kids to see how to dedicate themselves to a goal. The life lessons didn’t end there: She showed that when you achieve your goals, it’s okay to pause and celebrate the win.

“I’m not too shy to admit I am money motivated,” Mandi said. “I am the sole provider of income in my home and having the same quality of my life for my kids before the divorce, if not better, is my priority.”

Mandi also has a newfound view of success, being a respected business owner, and is known as a connector in her Green Bay community.

“After 15 years of being a stay-at-home mom, I feel I have a bigger purpose and place in our community and my career and I want to keep that!”

Balancing a still fairly new publication business during a global pandemic was not without its stressors. With two kids in high school with demanding schedules (in normal life), a third child in elementary school, virtual learning, a new way of doing business, you name it – “it has been quite a ride, but one I have been able to maneuver through due to flexibility in my business,” Mandi reflects.

“It was definitely a struggle trying to balance what I wanted to do, needed to do, and felt I should do. Mentally and physically it was exhausting, especially as a single mom. And the hardest part for me was keeping our home a positive atmosphere. In a world of stress, anxiety, and opinions, upset partners, stressed business owners, vaccine opinions, and quarantine opinions, it was a challenge and still is from time to time,” she said candidly.

When I originally interviewed Mandi for this blog for the first time in 2019 – at 7:00am – she was jumping into a friend’s car on the way to be a pacer at her next road race. And, despite it being a tad early and her being a bit busy, Mandi gladly made time. As she succinctly put it, “It’s not always about being ‘up,’ but being organized, right?”

There are many parallels between Mandi’s work with Stroll and her pacing responsibilities – one of which being the necessity of a fine-tuned schedule – but she also has her work to thank for this newfound passion.

“I didn’t even know what this was a year ago,” Mandi confessed at the time. “I paced with OnPace Race, a pace team owned by a husband-and-wife couple who are residents in my Stroll Ledgeview neighborhood. I wrote a feature story on their company a year ago. I was quickly convinced to try pacing, and after one time I was hooked. I’ve been a part of their team ever since and now we are like family!" 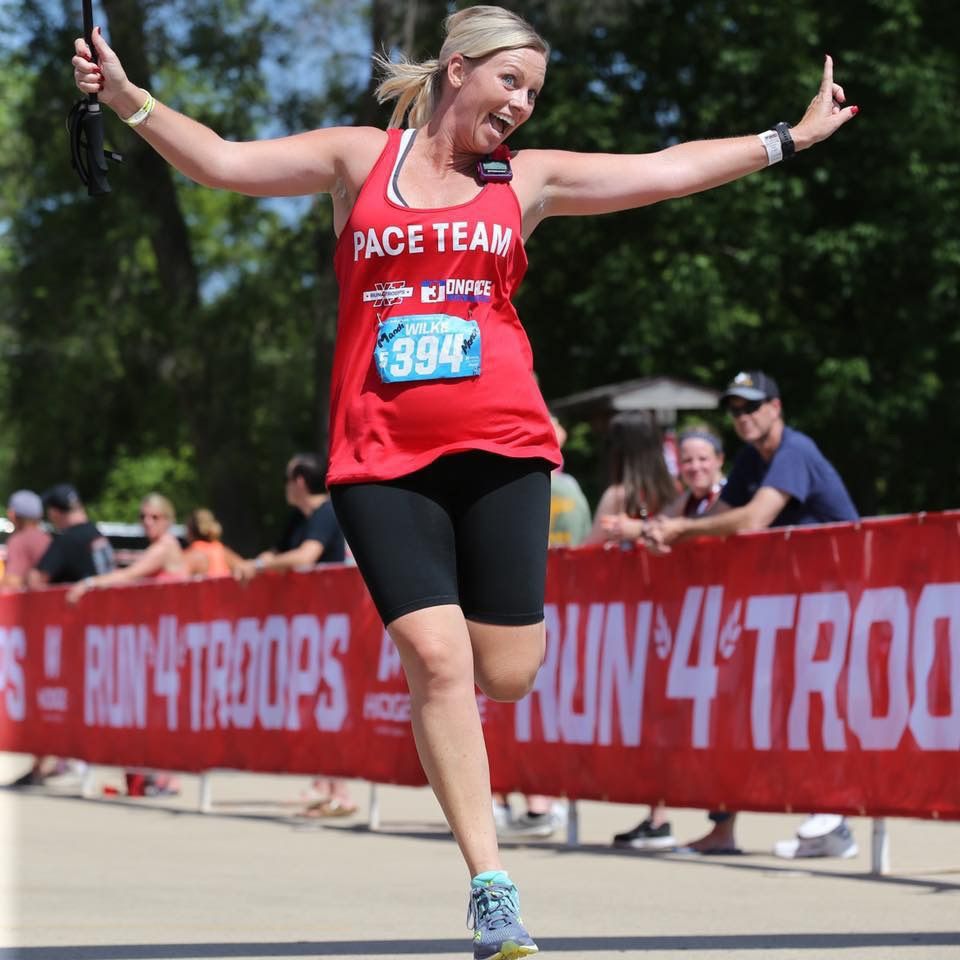 With many paced races now under her belt (including multiple states and even races outside of the U.S.), one would think she’s done this for many years. She is typically assigned anywhere between 2 hours, 45 minutes up to 3 hours,15 minutes for her pace time – affectionately called the “party pace.”

“They roped me in and now I’m stuck with them,” Mandi slyly said in the car, within earshot of the OnPace Race owner on their road trip to Bismarck. “The object is to all run slower than we can to help others run faster than they thought they could.”

What motivates Mandi? Just like with pacing, she doesn’t want to fly under the radar in anything she does. She wants to be noticed. She speaks at N2 Conferences. She spends most of her time meeting and surrounding herself with people who are where she wants to be. She represents hundreds of Area Directors as a member of the Stroll advisory board, weighing in on big business decisions. And she’s keeping pace all the while.

Take it from Mandy: “If you’re looking for purpose and fulfillment, you will find it within this organization. If you want flexibility, success, and being a present parent (after ramp-up, of course) this is a perfect fit. You can have it all once you get established. Your desires are your potential in this business!”

Find an opening in your area

3 Moms Who Found a Career That Works for Them